This is the first bread recipe that I made and is the bread that caused my bread making craze that has now lasted for more than 20 years. I have the honour of being in the kitchen of the month and thought it might be fun for the other BBBabes to make it too.

The recipe calls for all-purpose, rye and whole wheat flours as well as wheat germ. And molasses, fennel seeds, dried ginger and raisins too.

The dough is quite slack. After it has been kneaded, I folded it in the bowl a few times to strengthen it.

With only the tiniest nudge from the flat of a finger, the risen dough falls cleanly out of the bowl. Once on the board, I divided it in two and folded each piece in half before shaping it.

I shaped the dough into two rounds. On one of the rounds, I balanced star cookie cutters, thinking we would freeze that loaf for Christmas.

Alas, I allowed the shaped loaf to over-rise.

The star is still visible, but we can't serve that to guests!

The plain loaf looks a little better (although it's a bit on the flat side). This is the loaf we put in the freezer.

The inside of the star loaf looks fabulous though. We could have served this to guests after all....

Clark's bread is the perfect foil for chicken liver pate with green peppercorns.

And it's great with lentil soup as well.

On a holiday many years ago, we went for a splash-out dinner at the fabulous restaurant "Clark's by the Bay" (now sadly closed) near Kingston, Ontario. With the spectacular dinner came the most wonderful freshly baked rolls. And because we came from far away Toronto, I thought it would be okay to ask how these rolls were made. Our server (who happened to be the owner and somalier) said he'd go to the kitchen and ask. And he returned about 30 seconds later and smiled as he handed me a piece of paper: a photocopy of the very recipe that had been published in the local paper a few weeks before. I still have that sheet of paper with the molasses fennel rye recipe that Clark handed me all those years ago. Here is what that once pristine sheet of paper looks like now. (Please read more details about the recipe here.)

(The thumbnail image appearing on links to this page is housed on Flicker: etherwork photostream.) 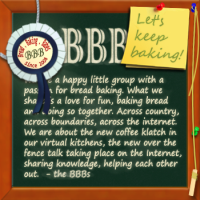 This work is licensed under a Creative Commons License